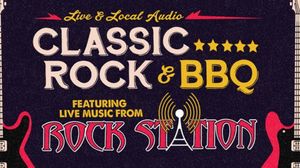 all the events for this evening. This includes our concert, the 5K run and any other sponsored events. Sorry.

Started in the fall of 2005 by veteran guitarist STEVE SPROWLES, ROCK STATION hoped to fill the growing need in the tri-state area for a classic rock and roll band that played the kind of music club goers demanded, but often found hard to come by.  Drawing from a pool of highly talented local musicians, Steve was able to build a dynamic and exciting band that immediately became an irresistible force on the Louisville club circuit.

The band has gone through a few line-up changes over the years, but it was always able to find equally talented and highly motivated musicians to fill the gap. Rock Station has stood the test of time and in its 15-year history, the band has never compromised the music!  In fact, with 2020 rolling in, the band is stronger than ever with a whole new list of rock hits.

Rock Station has wowed audiences with their soaring vocal harmonies and blistering guitar and keyboard riffs. Performing classic hits from bands such as Styx, Boston, Journey, Wings, Foreigner, REO Speedwagon, Genesis, The Who, and others…ROCK STATION will keep you entertained from from the first note to the last!

Catch the next ROCK STATION show at your favorite local nightclub, these guys will not disappoint you!